//
you're reading...
Fishing-Related and Law-Enforcement Activities

The Crucial South China Sea Ruling No One Is Talking About

Amid the significant media buzz and scrutiny over the arbitral tribunal’s July ruling (PDF) before the Permanent Court of Arbitration (PCA) regarding disputed maritime rights in the South China Sea, which sided with the Philippines on most counts and resulted in a major legal and diplomatic defeat for China, an important but less conspicuous ruling within the PCA award document on Chinese coast guard behavior was largely overlooked by the press. The ruling, entitled “Operation of Law Enforcement Vessels in a Dangerous Manner,” sought to assess whether or not China, by the actions of its maritime law enforcement (MLE) vessels, had breached its obligations under the United Nations Law of the Sea Convention (UNCLOS (PDF)) by operating “in a dangerous manner causing serious risk of collision to Philippine vessels navigating in the vicinity of Scarborough Shoal,” otherwise known as the Philippines’ Submission No. 13.

In one of the most sweeping rulings on the actions of maritime law enforcement in disputed waters on legal record, the tribunal found that China’s coast guard had breached several UNCLOS articles governing safety and navigation at sea.

Why the Ruling Matters

The court’s sweeping condemnation of Chinese MLE behavior is important for several reasons. First, the court struck down the Chinese argument that its actions were simply a defensive measure undertaken in response to a perceived threat by Filipino MLE actions. Rather, the court found that the Chinese maneuvers themselves created an immediate danger and demonstrated a serious and intentional breach of fundamental rules under COLREGS that ships take precautions for safe transit at sea.

Second, the court’s ruling thrust into the spotlight the crucial but underappreciated value of COLREGS as a convention governing basic responsibilities of navigation and safety at sea. By employing the rules of COLREGS as a key maritime convention with applicability to the broader principles within UNCLOS, namely Article 94, the tribunal offered important thresholds of MLE violations and a legal precedence upon which analysts and international maritime legal prosecutors alike can rely upon in future cases of coercion by MLE actors at sea. 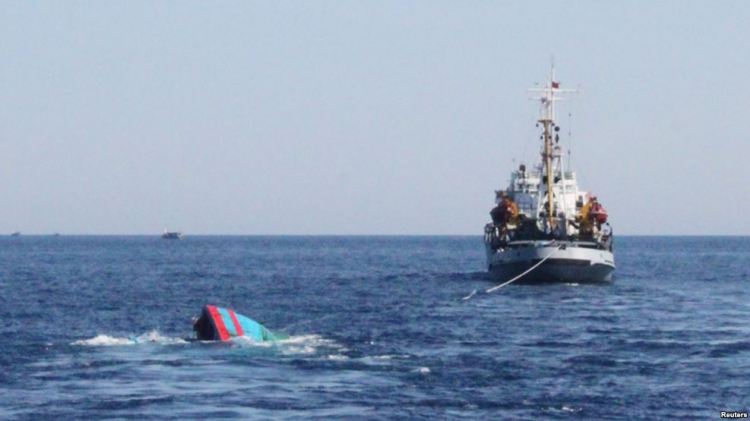 A Vietnamese sinking boat (L) was rammed and then sunk by Chinese coast guard vessels on May 2014 during China’s deployment of deep-water oil rig HYSY981. Source: Viet Nam’s media.

Finally, China’s decision to deploy its coast guard as a coercive arm of its state policy to consolidate and protect its maritime interests in the South China Sea has been a cause for concern in the region. China’s policy of “might makes right” and numerical superiority of coast guard vessels ensures continued dominance and bullying tactics towards smaller claimants in the South China Sea. While China can easily write off the PCA ruling on its coast guard behavior as just another “piece of paper” it can ignore, the hope is that this and future rulings will over time build a legal case that abiding by basic maritime principles of safety at sea is in the interest of all countries, including China.

Read the full commentary at http://www.rand.org/blog/2016/09/the-crucial-south-china-sea-ruling-no-one-is-talking.html